Best Health web editor Kat Tancock is running her first half-marathon this fall. Follow along and offer support as she blogs about reaching her goal 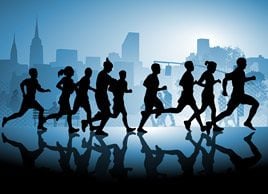 Sometimes I think I’m crazy to want to run a half-marathon. Running for two hours straight? (I’m trying to convince myself I can do the race in less than that.) Seems a bit loopy.

But then, half an hour used to feel long’until I started running 10K races last year. And everyone else on the planet seems to be doing it, so why can’t I?

I’m registered for the Nike Women’s half-marathon in San Francisco in October, and a few local races before then, including a 10-miler in July. And I need your help. I’m convinced that blogging about my efforts will help me do better’after all, it’s worked for other women. Read along and offer your advice, and you’ll help me reach my goal. Even better, start your own health blog and we can support each other.

October 22: Half marathon = check!
It’s been a long journey but it’s done now’I ran the half marathon at Nike Women’s in San Francisco on Sunday at exactly my goal time: 2 hours and 30 seconds. It was a great race, I had a blast and felt wonderful afterward. And it didn’t hurt that I… Read more

October 8: The final countdown
Remember when October was far, far in the distant future? Well, last week it suddenly showed up on my doorstep, and as of today I have 10 days until the half-marathon in San Francisco. I had hoped to get up to a 20 km run before the race, but the Weekend… Read more

September 24: Boot camp is kicking my butt
When I got the invitation to take part in an editors’ boot camp put on by Booty Camp Fitness, I was intrigued. I’d always wanted to try one of these group… Read more

September 8: Do you run when you’re sick?
Just in time for the long weekend, I came down with a cold on Saturday evening’not a terrible one, and definitely not the flu, but enough that it’s kept me close to home for a few days, and enough that I cancelled my long run for this evening. We had… Read more

August 14: Uh-oh’only 9 weeks until my half-marathon!
I’m embarrassed to say that I haven’t gone on a run longer than 9 km since the Toronto 10-miler almost 4 weeks ago. Bad! And even worse, I just counted and I have just 9 weeks until I’m on my way to the airport to travel to San Francisco for the half-marathon… Read more

July 21: 10 miles down, 3 to go! Plus my killer pre-run smoothie recipe
This weekend I ran my longest race ever, the Acura Toronto 10-Miler. (That’s 16.1 kilometres, or 60 percent longer than a 10K, and about halfway between a 10K and a half-marathon.) Well,… Read more

July 3: My experiments with healthy "sport" foods
As a longtime vegetarian (18 years and counting since my last hamburger), I’ve done a lot of experimenting with "alternative" foods. I tried being vegan’it’s hard!’and have settled into a low-dairy vegetarian diet with a focus on whole foods. I put… Read more

June 29: Ow! My butt hurts
Between battling chronic hip flexor and IT band issues and wanting to finish the half-marathon with an awesome time, I decided I need some help from an expert. So a friend of mine hooked me up with her personal trainer to get a consultation and some training… Read more

June 22: The pros and cons of smaller races
This past weekend I took the train up to Kitchener-Waterloo to visit a friend and run the Waterloo Classic 10K on Sunday morning. The good: the heavy rain let up and Sunday morning was clear and a… Read more

June 10: How hot yoga helps my running
I love to run’but sometimes, my body protests, especially as I increase my mileage. My personal issue is with my hip flexors and the other muscles in the area’after a 12 km run the weekend before last, for instance, the area all around my left hip… Read more

June 1: 6 motivation tips to keep you running or walking
One of the hardest things about running is actually putting on your shoes and getting out of the door. It doesn’t matter how much you enjoy the process or the post-run high, all runners have moments when they’d rather just stay on the couch. Now that… Read more

May 20: If you’re going to San Francisco…
I can’t help it, every time I think of San Francisco I get that song in my head. I don’t think I’ll really wear flowers in my hair, but I did buy plane tickets last night for me and my friend so we can make it to the half-marathon in October! We’ll be… Read more

May 15: Running without pain
For most people, running is synonymous with running injuries, those nagging aches and pains that crop up and threaten to take away your ability to run altogether. My personal issue is tight hip flexors that cause hip pain, but it seems that everyone has… Read more

May 4: A new personal 10K best!
Yesterday I ran the Sporting Life 10K here in Toronto. It’s the second-largest race in the country (after the Sun Run in Vancouver), with over 10,000 participants, and as it’s mostly downhill… Read more

April 30: I’ve met one of my running goals
Last year, when we were getting ramped up in our running, I said to my running partner, "I’d love to become one of those people who just goes for a 10 km run after work and it’s no big deal." Well, I did it! Last night we met after work with the intention… Read more

April 24: Running with allergies
Being a runner in a city like Toronto, with its poor excuse for a climate and year-round bad air, makes you appreciate the simple things in life’you know, like breathing. Throw allergies into the mix and you have to wonder if you should invest in a… Read more

April 22: Should we all be running barefoot?
I discovered two stories over the past few days (one from the Boston Globe, one from the Daily Mail) that both say essentially the same thing: running injuries have increased, not decreased, as running shoes have evolved… Read more

April 20: Stay safe when you’re running
A couple of recent stories have made me extra conscious of running safety. First, there was the recent murder in Vancouver of Wendy Ladner-Beaudry, which I think… Read more

April 17: Summer running, happened so fast…
Okay, I’m stretching the truth there a little’not only is it not summer yet, but summer running is far from ideal. Spring/fall is perfect, and on Wednesday I went for my first jacket-less run of the year, and it felt so good! Nike hosts regular media… Read more

April 14: Book review: What I Talk About When I Talk About Running
Running is often a very solitary endeavour, so I like to read about other runners’ experiences to get a sense of how they approach the sport. One book I read recently and really enjoyed is… Read more

April 6: 5 tips for preventing running injuries
Last year, when I really got into running regularly, I went too hard, too fast, and ended up with a very painful left hip that ended up being due to overly tight hip flexors. The result? I had to take three months off, and even now, a couple of weeks… Read more

April 1: When can you call yourself a runner?
I would never say I’ve been a non-runner. The mile was one of the two things I was good at in high school P.E. class (gymnastics was the other) and through university and afterward I had sporadic flings with the idea of going… Read more

We are no longer supporting IE (Internet Explorer) as we strive to provide site experiences for browsers that support new web standards and security practices.

We recommend our users to update the browser

This site uses “cookies” for the purposes set out in our Privacy Policy. To review this information or withdraw your consent please consult the Privacy Policy. By clicking on the “X” to close this page, by browsing this page, by activating a hyperlink or continuing to browse, you agree to the use of cookies.xI refuse
Revoke cookies